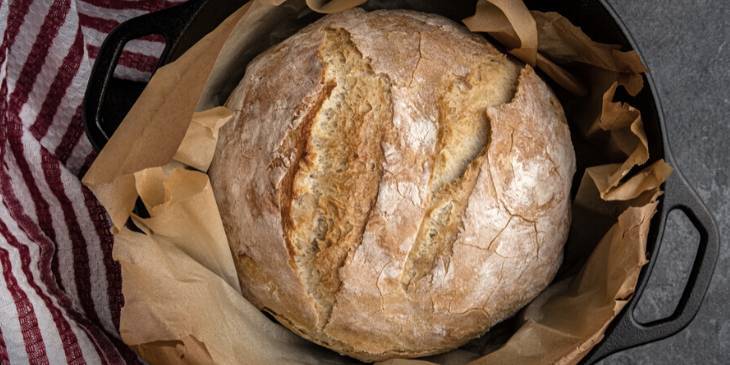 How to Make Bread In a Slow Cooker (Recipe Included)

One of the best things about cooking with a slow cooker is that you don’t have to have your eyes on it at all times. It’s a slow cooker, also known as a crock-pot. Therefore, you know it won’t burn your food when you leave it unattended. While we all know that crock pots can be used to make stew, soup, and all sorts of different foods, not many know that you can also make slow cooker bread!

Another advantage of baking with your slow cooker or crockpot is that you won’t have to heat up your oven. In areas with warmer climates, this can be a huge blessing because it prevents your house from feeling too warm and stuffy from the oven. How to Make Slow Cooker Bread

The good news is that you can bake bread using your slow cooker as mentioned above. However, if you don't already have one, you can always get one online at a pretty reasonable price. Just look for one that is big enough for a loaf of bread and maybe a built in thermometer.

Here is what you need to know if you were looking for tips or instructions for making slow cooker bread.

How Does It Work?

The right temperature for your crockpot can differ based on the size and the amount of bread that you’re planning on baking. Ideally, you need the temperature to be 200 degrees Fahrenheit to properly bake the bread from inside.

When making kneaded bread, you also do not have to wait until the bread dough rises before putting it in the slow cooker. It will rise in the cooker and bake at the same time, so it saves you valuable time!

Just leave the bread in there until you can see that it has baked all the way—you can use a fork or a toothpick to check the consistency to be sure.

How Long Does It Take?

The amount of time it takes to bake bread in the slow cooker can vary depending on the kind of slow cooker you have. It can take from between 1 hour to 2.5 hours, but to know the exact time it will take for your crock-pot, you should do a little experimenting the first time around in order to get a better estimate.

Is There Any Difference Between Oven or Slow Cooker Bread?

If you’re concerned about whether oven bread tastes different from crock-pot bread, yes it does. The texture of slow cooker bread is heavier and richer and does not have the light, spongy feeling that oven bread does.

If you want the bread to last for around 2-3 days, you should keep it in room temperature in an airtight bag, such as a Ziploc bag. You will have to ensure that no moisture gets onto the bread or that it isn’t left out in the open if you want it to stay fresh.

How Can You Store Slow Cooker Bread?

Homemade bread does not stay fresh or edible for as long as store-bought bread. It’s better not to put the bread in the refrigerator, because it will only make it get stale quicker and can even cause a moldy layer over your bread.

Keep it in an airtight container or bag, as mentioned above. If you want to preserve it for later, you can freeze it after putting it in plastic wrap. This can keep the bread fresh for around 3 weeks at most.

When Should You Use Your Slow Cooker For Bread?

You can use your slow cooker for baking bread whenever you feel like it. The main reason people first started opting for a crockpot instead of an oven to bake was that ovens heat up the entire kitchen and become uncomfortable in the summer.

Are There Any Downsides?

The only downside is that if you’re not used to using a crockpot for baking bread, you might face a few difficulties at the start. However, the more willing you are to experiment and use trial and error to understand how your crockpot works, the quicker you’ll become a bread-baking pro.

Some people may also find that slow cooker bread ends up being flatter and not as fluffy as oven-baked bread. Slow cookers are fairly easy to use for baking, as long as you have an idea of how much to fill the pot and how long to let the bread bake.

It will take a few attempts to get the hang of it, so you should be a little careful and check the bread every half-hour the first few times.

Line your crockpot with parchment paper to make it easier for you to handle it and take it out of the pot. It also makes it easier to clean.

3. Have Your Thermometer Ready

Your thermometer will be your companion when baking your bread. So if your crock pot doesn't come with one, make sure to have it handy at all times.

If you handle or touch your dough more then usual, it can end up coming out tough and dense. Moreover, if you handle it once it's baked, it can end up having dimples on the crust. Less handled loaves appear to look better. Just take it out and allow it to cool.

5. Use Your Broiler For Browner Crust

If it's a must that you have a brown crust, you can use your broiler. Just place your bread under the broiler for 3 to 5 minutes. How to Make Bread In Your Slow Cooker

Mix the water, sugar, and yeast and leave them for around 10 minutes. When the mixture starts to rise slightly, add the flour, salt and start mixing until it becomes a dough. And leave it overnight to prove or rise.

After around 12-18 hours, shape the dough, put some flour on it to dredge and place it in the slow cooker at HIGH. You can turn the bread over every half an hour if you want to ensure it bakes evenly.

Slow cooker bread tastes almost the same as any other kind of homemade bread. The advantage of it is that it doesn’t require the hassle of heating up your oven and potentially warming up your house. It also doesn’t require as much supervision, so it’s more convenient with a busy schedule!

How to Fix Your KitchenAid Mixer Without Hiring a Pro